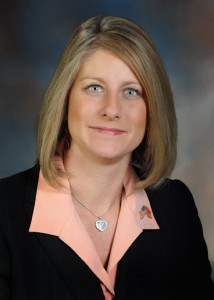 It began seven years ago when 84th District State Rep. Stephanie Kifowit, D-Oswego, was elected to office and looking for a way to connect with residents.

Since then, Coffee with Kifowit has become an event residents can count on attending every Monday morning at locations throughout Kifowit’s district. As many as 30 people gather at various locations for coffee and conversation, discussing both federal and local issues in a casual and comfortable environment.

“The essence of government is to represent people, and you can’t do that if you don’t talk with them,” Kifowit said. “We have very engaging conversations from both sides of the political spectrum,” which is something the state representative feels is of the utmost importance.

Republicans, Democrats and Independents get an opportunity to share their views in a respectful and judgement-free atmosphere, Kifowit said.

“This allows for dialogue we don’t really see these days with such polarizing political views. I might not always agree with a resident, but I listen and understand where the person is coming from. It’s about mutual respect, and that really gets lost in the political world today,” she said.

To be able to meet in the middle is something that’s not only important to Kifowit, but for many in the current divisive climate, and the coffee dates are one way of going about solving this problem.

From regulars, who attend every event, to drop-in guests and even Girl Scouts, Coffee with Kifowit has afforded residents the chance to talk about issues, their community, and their political concerns.

“It’s a pleasant experience and something I look forward to starting the week doing,” Kifowit said. “I try to make it rewarding and multi-faceted for the people who attend. We are all different in nature, but when we open up our minds and instill compassion to other people viewpoints and experiences, we can meet in the middle and dialogue, and that’s important. I want to continue doing it as long as I’m in office.”

Besides the coffee events, Kifowit holds a more formal discussion on the third Thursday of every month. There is a time for general comments and questions, but usually a speaker of some sort is brought in to discuss and issue on those days.

“These events have all been very successful and continue to grow,” Kifowit said.

The Coffee with Kifowit date and locations for July are as follows: