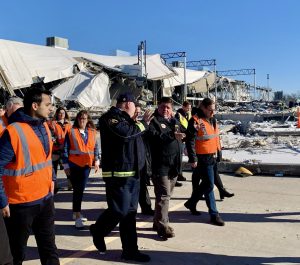 In the wake of Friday night storms that left six dead at an Amazon warehouse in Edwardsville, a disaster proclamation was issued Monday for 28 counties in southern and central Illinois. The proclamation will bring personnel or equipment from the Illinois Emergency Management Agency to assist with storm recovery.

“My administration is committed to standing with Edwardsville and all of the surrounding communities affected in every aspect of the immediate recovery, as well as on the road to rebuilding,” said Gov. J.B. Pritzker, who issued the proclamation. “Yesterday, I authorized a state disaster proclamation for Madison County, as well as all storm-impacted counties, to facilitate recovery efforts, as well as the pursuit of additional federal resources. We are working directly with the White House and FEMA to ensure access to all federal resources for this community. And, as local entities work to secure federal reimbursements and recovery dollars, we will assist every step of the way.”

Pritzker was back at the site of the 593,000-square-foot warehouse on Monday morning with Rep. Amy Elik, R-Fosterburg, and Rep. Katie Stuart, D-Edwardsville, to announce the disaster proclamation.

“As our community looks ahead following the devastating storms that hit our region last weekend, now is a time for us to come together to support each other and heal,” Stuart said. “I want to thank Governor Pritzker for deploying resources to our region to help those who were directly impacted by the storms recover.”

“The disaster proclamation will provide our region additional resources and funding needed to help our community recover following Friday night’s storm.” Elik said. “I appreciate everything our first responders and volunteers have and continue to do to help the region recover.” 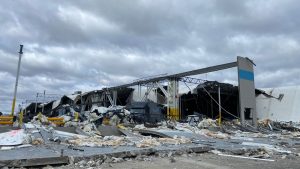 Madison County Board Chairman Kurt Prenzler said the storm was erratic and devastating.

Prenzler met Monday morning with Amazon managers who told him the storm hit as at one of the busiest times of the year as orders are readied for Christmas deliveries. When the storm hit around 8:30 on Friday night, trucks were returning, making accounting for the number inside the warehouse difficult, Prenzler said.

Emergency crews arrived quickly and survivors were removed by bus or car. Some were taken to Pontoon Beach City Hall, where grief counselors were on hand.

“This was a terrible and random storm,” Prenzler said. “We are still in shock by it all.”

Fillback said it was sobering.

As the emergency crews worked through Friday night to try to find and extract survivors, they were hit again by a second storm about 3 a.m. on Saturday, Fillback said.

“It was definitely one of our worst days,” he said. “Hopefully, we don’t have another like this that requires this level of response again.”

Prenzler said he intended to sign the disaster proclamation on Monday afternoon.