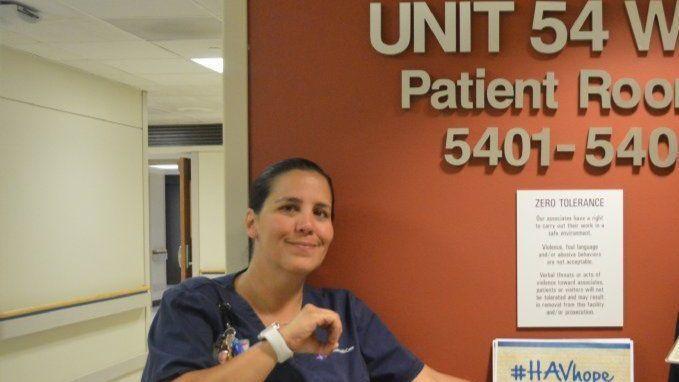 Sonja McCarthy had no idea the day state Rep. Stephanie Kifowit (D-Oswego) made one of her routine “constituency outreach” stops at her Aurora home in the summer of 2016 that the two would end up working together on a bill to reduce workplace violence.

McCarthy, an emergency room nurse who had just gotten off her overnight shift at Advocate Good Samaritan Hospital in Downers Grove — and, like Kifowit, a fellow Marine — was awakened by that late morning knock on her door. But the two women quickly fell into a passionate conversation when her state rep asked what issues were of most concern.

McCarthy knew a lot about workplace violence. Not only had she run into it time and again as a level one trauma nurse at Advocate Good Samaritan for 13 years, she was a founding member of the group’s committee to address an issue that was starting to be recognized as a critical problem in the industry.

The conversation went well. And because of this meeting, Kifowit was instrumental in passing a bill that would raise the penalty for assaulting a healthcare worker to a felony.

But that was far from enough.

The two met again at a rally at Northwestern Medicine Delnor Hospital in Geneva in August the following year that was attended by throngs of nurses rightfully upset after a Kane County inmate brought in for treatment in May 2017 at the hospital stole a guard’s gun and held two nurses hostage, even sexually assaulting one of the caregivers before he was shot and killed by police, according to reports.

While many hospitals had begun to recognize workplace violence as an issue, it was the Delnor incident that brought national attention to the problem.

And, as a lawmaker, it takes working with those who have “first-hand experience to realize its importance,” Kifowit said. “People in the community really are the local experts on things.”

McCarthy, a charge nurse who “felt responsible for the well-being of the staff,” joined Kifowit in writing a bill that went into effect at the start of this year requiring Illinois hospitals to have violence prevention protocols in place. With a framework built using Occupational Safety and Health Administration guidelines, the law includes better communication between hospitals and law enforcement, as well as specific requirements for inmates seeking medical treatment. It also provides whistle-blower protection for those who report violent incidents and requires specific action by healthcare facilities.

Workplace violence is, of course, nothing new, and that’s especially true of hospitals, in particular emergency rooms, where patients and loved ones are often in a state of stress or crisis. But a rash of high-profile incidents, particularly the Delnor assault, have put a much-needed spotlight on what experts describe as a serious and escalating problem.

A report from the Occupational Safety and Health Administration indicated workplace violence at hospitals was up 72 percent from 2012 to 2015. Even more compelling than cold data, however, are the stories that come from local hospitals that deal with verbal and physical assault on what officials insist is a daily basis.

McCarthy, who had just gotten off her overnight shift, drove to Springfield, where she testified before the House Committee about a friend and coworker who was slammed into a wall by a patient. Although her injuries were minor, the employee did not return to work for a few days because of the emotional stress that resulted in this level of violence, she said.

While workplace violence is not always this dramatic, it is indeed “a daily occurrence,” McCarthy insisted, recalling an incident from last August where a medical technician suffered a concussion from being punched by a patient who had “just retrieved a chair for his grandmother to make her more comfortable.”

The next day, she said, a patient spat in the face of another tech and the following day a tech was injured while protecting a nurse from a patient attempting to kick her.

Mary Lou Mastro, president and CEO of Edward-Elmhurst Health, said there is no doubt “we are seeing an increase in acts of violence,” adding that, as a nurse in the 1970s and ‘80s, she never saw the kind of “in-your-face” aggression employees now face day-in and day-out.

For too long, healthcare workers have simply put up with verbal attacks or being punched and spat upon, she said, “as just part of the job.”

Hospital officials also seem to agree the reason we are seeing more violence in medical settings is lack of resources for mental health, as well as a general lack of civility and sense of entitlement patients often feel when they walk into a hospital.

Even before Delnor, hospitals like Advocate Good Samaritan had already begun to recognize this disturbing escalation. Three years ago, Edward-Elmhurst put into place a workplace violence committee and worked to get employees to report incidents of violence that had gone under-reported.

But more was called for, especially after the Geneva case. Advocate Aurora Health accelerated its safety training and refresher training at all inpatient and outpatient facilities. In 2017, Rush Copley Medical Center formed a Workplace Safety Committee, upgraded its aggressive patient and care of prisoner policies, reviewed its active shooter policy and enhanced department drills, according to Vice President and Chief Operating Officer John Diederich.

The hospital also educated employees on “Run, Hide, Fight” and during the coming months, “will be conducting additional training to enhance the safety of everyone who comes to our campuses to work or receive medical care,” he said.

While there has been “critical incident stress training” in place for many years at Edward-Elmhurst, it is now implemented across a much broader scale and includes non-clinical workers such as receptionists in doctor’s offices, noted Mastro.

Every employee who gets injured receives a call from the president of the company, she added, “to see how they are doing, to let them know that what happened is not acceptable and to make sure they receive necessary follow-up.”

Also, every morning there is a “safety huddle … where we talk about any issues that are safety concerns, including verbal and physical assaults.”

One physician, Mastro added, recently had his jaw broken. And, while some of this violence is the result of drug reactions, it can also involve patients “who come in with the intent to harm.” All of which the CEO describes as a “dilemma” because hospitals are a workplace that welcomes saints and sinners alike.

Still, “we have to balance that with safety,” she said of healthcare employees who “get up every day in service to others. They have a right to a safe workplace.”

While hospitals statewide already have or are working to comply with the new law, the consensus is there is no way you can stop violence from happening. As one official noted, when you have hundreds of patients in a building with thousands going through the ER a year, “things are going to happen.”

But the idea is to continually work toward updating policies, reviewing them and giving employees as much feedback as possible to assure them they will be kept as safe as possible, officials insist.

McCarthy, who estimates she’s put “thousands of hours” into this issue, hopes to one day train others in how to recognize pre-violence indicators and de-escalate situations, as well as work with hospitals on appropriate documentation that, for example, would more quickly denote a patient’s history of violence.

While attacks, particularly verbal assaults, are still under-reported, likely because there is still fear among workers that speaking out could jeopardize their careers, McCarthy is encouraged by “significant progress” in defining the problem.

And, while she recognizes there “is still work to do when it comes to how best to report and track the violence,” she describes it “as such a proud moment” when this bill became law.

“We no longer consider it part of the job … that it’s not OK if this person is violent towards me,” she said. “I really do see how far we have come.”