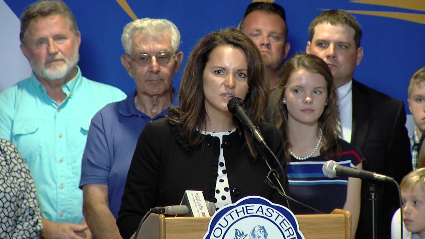 WSIL — Engaged in one of the most hotly contested house races in the state, Democratic incumbent Natalie Phelps Finnie and Republican Patrick Windhorst are battling it out to represent Illinois’ 118th district.

Finnie has been running ads since August, costing hundreds of thousands of dollars. But she’s also been on the receiving end of more than a million dollars in campaign contributions since she took office last year, mostly from state Democrats and affiliated groups.

The campaign committees for other Illinois Democrats have donated more than $280,000 to Finnie, including more than $55,000 each from Metro East Representative Jay Hoffman and Cook County Representative Robert Martwick.

House Speaker Mike Madigan has even jumped into the race, donating more than $750 to Finnie.

The Illinois Democratic Party and Democratic Majority PAC, both controlled by Madigan are also big players in the race, donating close to $100,000 combined.

Windhorst has run ads connecting Finnie to Madigan, who is widely unpopular in southern Illinois.

He says the donations show Finnie will be loyal to Madigan if reelected. "He supports my opponent and it’ll be clear if she’s elected that she will vote for him for Speaker," Windhorst said in a phone interview.

Finnie says she hasn’t decided who she’d support for House Speaker, "Nobody can buy my loyalty. My loyalty is with the people of southern Illinois and nothing less."

Finnie’s biggest contributor — unions — which have donated nearly $500,000 over the past year.

That includes tens of thousands of dollars from unions representing and electrical workers.

Finnie says she’s proud of the union support because it mean’s she’s fighting for workers, "They’re what build people up, bring them out of poverty, make the middle class strong and I have been very clear and unapologetic about my support for them."

Finnie’s contributions also include more than $60,000 from special interest groups including coal and medical associations, and more than $80,000 from businesses.

"Follow the Money" is a new segment that will run through November’s election.

If there’s a politician whose finances you’d like us to profile, send an email to followthemoney@wsiltv.com.